As you may have heard via twitter: Dude! We're getting the band flash mob back together! Here's the skinny peeps:

Audience members are welcome, but are asked to keep the talking down to a minimum so we can work.

A new feature that I am going to be experimenting with is Livestream. Hopefully (*crosses fingers*) I will be able to Livestream the rehearsals, so that I can communicate with people in multiple ways. Some times you just need to hear it, you know? Plus then I won't forget what we did because it's recorded. ;P

I was reading Autumn's blog post about... oh well you've probably only read it. In it she said: "I get to be the Bad Guy. It's a pretty sweet role..." Heather thought: Basil Rathbone. Confused yet? Watson let me link that train of association for you. Bad guy - villain - movies - Robin Hood - Sir Guy/Prince John - (elimination round) Claude Rains - Basil Rathbone! So now and forever, I will think of Autumn as Basil. Not as the real person Basil, but as the caricature of the suave, sinister, clever, totally cool, dueling, awesome person I think of when I think of Basil.


So if Autumn is Basil, then that of course makes Miss Mythspent Youth Abigail/Lisa Sir John Gielgud. For me Sir John (that's what I call him, Sir John) is insanely brilliant. End of story. For me reading Mythspent is like eating candy, I can't get enough, Lisa is always really entertaining and clever. See the parallels?


And by process of elimination, KBB would be John Barrymore. (Kevin you were hard, I though of Spencer Tracy, Peter O'Toole, and Patrick Stewart, but none of them fit!) Barrymore is somebody who I think is a brilliant and actively smart actor and he has this charisma too, that makes you want to give him your attention.


Well now that I've probably embarrassed myself (and several other people, both living and dead) into the next decade, it's your turn! I want to hear what you think. Have I assigned people correctly? Who do you compare your friends with? Who do you think I am? (Don't be afraid. I won't find out where you live and turn all the socks in your drawer inside out or anything. What ever gave you that idea?) And mostly, does your brain think like this too?

P.S. If you didn't understand anything that I was referring to in this blog post. DON'T WORRY! Most people aren't the insane old film nerds that I am. These are the people your grandparents grew up watching. Yeah. I know...

Victoria got her Ra today!

Rah Rah! Err. Ra Ra!
And now she looks ugly. Or like a romulan. (Same thing.)
But even more so when she is a victim of the creepy wings glitch!
Heather/Victoria
Posted by Heather Raven at 2:52 PM No comments:

Here it is folks. A tour of my finally finished MFP! I was mostly inspired by the gorgeous palaces of Japan, and their temples and shrines. 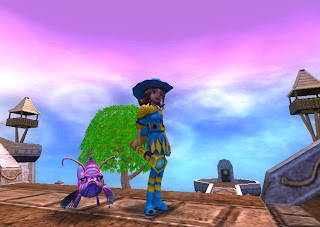 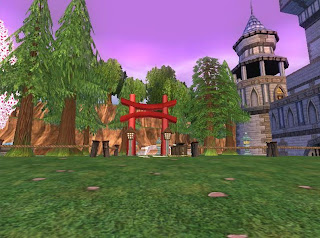 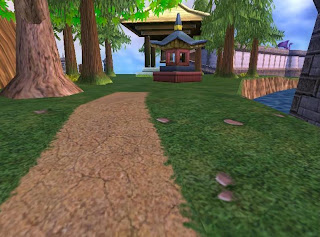 There is closed captioning for the hearing impaired wizards. I recommend using full screen with them though, they are kind of long. And please forgive me if they are kind of hard to read. I talk a lot and it was my first time doing them. 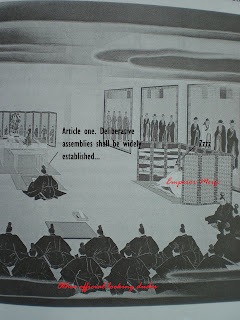 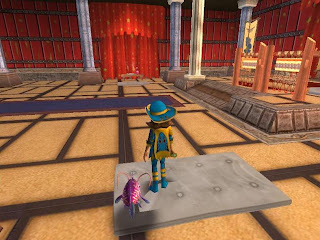 Enjoy!
If you are interested in Japanese history I recommend Modern Japan: A History in Documents and also the TV mini-series Japan: Memoirs of a Secret Empire  and Seven Samurai! Nah I'm kidding. Kurosawa is an awesome film-maker, but he's not really educational (ten points if you got the other reference in the post). ^_^
~Heather
Posted by Heather Raven at 5:03 PM 5 comments:

I made loads of progress this weekend. Including:
turning into a raven! 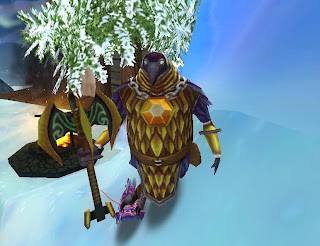 Getting a pet quest from my prof! 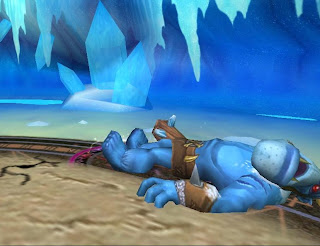 Getting my froggy pet! 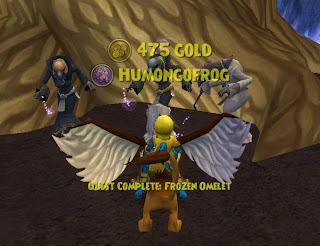 Completing Wintertusk with John and Isaac! 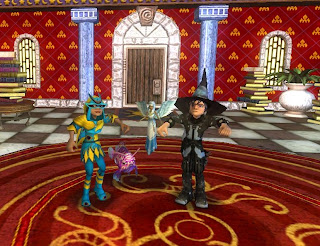 Using exclamation points!!!
And I finally finished decorating my MFP. I am going to make a video tour. It is awesome. Just sayin'.
~Heather
﻿
Posted by Heather Raven at 9:13 PM No comments: 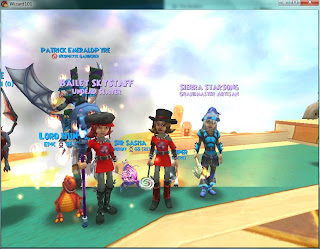 ~Heather
Posted by Heather Raven at 6:53 PM No comments:

Petapalooza. You're probably asking yourself what the big deal is. Normally I wouldn't be able to give you a good reason why it is getting so much attention. However, this time I can!
The wonderful #twizards discovered that in honor of petapalooza, KI Free Games and Wizblox have been updated with a new loot table! (Clicky-clicky to see!) This loot table includes mega snacks. You heard me. Mega snacks. That's enough to make anyone love Doodle Dug (aka the Great Escape game) at least a bit.

Also featured in the new loot table are some pets. Like the Death scarab, FOG unicorn, and Lighting Beetle.

While you have to play a lot of games to get all the cool loot you probably are drooling for at this point, think of it this way: you can sell all those extra pet snacks and cash in. Are you seeing gold yet? 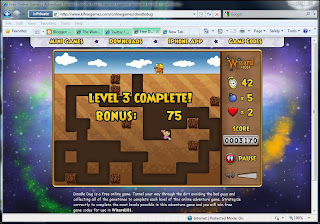 ~Heather
Posted by Heather Raven at 4:49 PM No comments:

Last night on Twitter I said I had a surprise for you. Well here it is. I started a new Wizard101 fan-fiction for your entertainment pleasure. I hope you enjoy reading it, as much as I am enjoying writing it. Without further ado, I give you:


The Adventures of Tristan Shadow: Thief
Rain poured down. The cobblestone streets were slippery under Tristan’s soft leather boots. He pulled his collar up around his shoulders in a vain attempt to keep some of the rain off of his neck. A bobby stood on the corner of Houndslow and Digdowns, looking thoroughly soaked and miserable. Tristan hurried up the side street. The bobby watched him go by, wishing that he too could retreat to come place of shelter on this dismal night. Tristan’s footsteps came to a stop in front of a large steamy windowed shop. Above hung a sign that declared the shop: Mr. Burt’s, bones and biscuits. Tristan took an empty envelope out of his pocket. He glanced at the writing on the back, hurrying as the rain blurred the ink. Assured that he was indeed in the right location, he grasped the brass door knob firmly and entered.

A Hole in the Bottom of Crab Alley

So. Water Works. Yeah. I think everyone has done it probably five times over by now. Anyway! My two besties and I decided, let's do WW just the three of us, without looking at any guide or anything! Woo!
Eventually, we figured it out. I am so proud of us, that we only failed once! It's just like the good ol' days. I haven't been sent to the commons in gosh only knows when.
It took us about ... three hours? Yep.

But we finally defeated Mr. Big.
I got my crazy super-hero/Lucha Libre mask. And did a victory dance.
﻿ ﻿
Please give a big round of applause for my friends Eli and Jeremy! Yay!
Now to figure out how to do it right...
Posted by Heather Raven at 6:38 PM No comments:

Finally we are seeing some of that awesome summer weather. Well that got me thinking about beaches, and sunscreen, and ice-cream, and cold sodas, and lazy days. And books! I love a good summer read, don't you? I thought I'd share some of my favorite books with you. Be forewarned I love mysteries, so if you're not into that you'll probably not like what I've suggested. Also, some of these are young people novels but some are adult (but looking at young people novels these days you probably couldn't tell the difference anyway!). Ready? "Allons-y!"

The Adventures of Sherlock Holmes by Sir Arthur Conan-Doyle

One of the most famous detectives of all time; a great collection of Sherlock's tales.

The Séance by Inian Lawrence
There's murder and trickery are afoot when Houdini comes to town. One of my favorite mystery/thrillers.

The Princess Tales by Gail Carson Levine
Everyone loves a mixed up fairy tale right? Well these are some of the best.

The Lion, the Witch, and the Wardrobe by C.S. Lewis
Oh Narnia. I love that magical world. I grew up reading these books, and Wardrobe is my all time favorite.

A Long Way From Chicago by Richard Peck
This is my favorite book on my bookshelf. Short-stories about two kids' adventures with their kooky grandma in depression era rural Illinois. I read these over, and over, and over!

The Crime at Black Dudley by Margery Allingham
This book was written in1929, and boy does it sound like it. Murder, intrigue, a daring escape! One of my new favorite detectives, Albert Campion (known to be a pseudonym) makes his first sparkling appearance.

How to Be Lovely: The Audrey Hepburn Way of Life by Melissa Hellstern
I got this book for my birthday. A lovely view at the life of Audrey, and full of lovely pictures 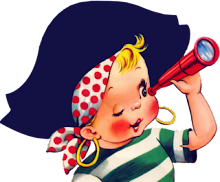